How AmbiPur got back my smile

It has been a year since we moved in to Mumbai. While all my friends were excited for me, I was full of anxiety. The reason being, the met department had predicted arrival of monsoons a week after we landed.

Now we all have heard about the famous Mumbai monsoons that operate at their own whims and fancies. Since the predicted day was a week away, I was optimistic I would do the basic set up in the house by then. However, if everything goes as planned, we wouldn’t crib so much about games destiny plays. Monsoons decided to knock on the door before our Packers and movers and I was as frightened as a student who lands up at the exam hall without the admit card!

Nevertheless, we did the basic set up once the stuff arrived. Just when I thought things weren’t as bad as I thought, another ugly side of monsoons surprised me. There were strange smells in the house. My cupboard smelt of dampness with my black clothes decorated by white mildew; the trash in the dustbin made its presence felt each morning; the shoe rack shouted of Mr. Hubby’s smelly socks; the laundry bag too troubled me with the smell of damp clothes. Like all hubbies, Mr. Hubby too throws his damp towel on the bed and one day it got me so agitated that I rudely ask him to dump the towel on his side of the bed, for the bed too had that characteristic damp smell!

Since we were living away from our families, we looked forward to romantic evenings and lazy weekends. However, the olfactory torture was eating away our patience and spoiling our “Us” time. Instead of spending romantic moments, we woke up each day to the frustration of non stop rains and unpleasant smells floating into our house and often ended up venting out our frustration at each other.

Anger isn’t the solution to all problems, I soon realised and something had to be done to get rid of the smelly torture. And thus began my R&D – incense sticks, flowers, scented candles – I tried them all. However, they would give us temporary relief and the smells would return to haunt us. Frustrated I was almost losing my patience till I discovered AmbiPur at the local hypermarket one day. Expecting nothing more than another room freshener, I picked up a bottle however, the bottle read, “Ambi Pur Air Effects doesn’t just cover odours, it completely removes them!” Now here was the catch and I decided to give it a try. 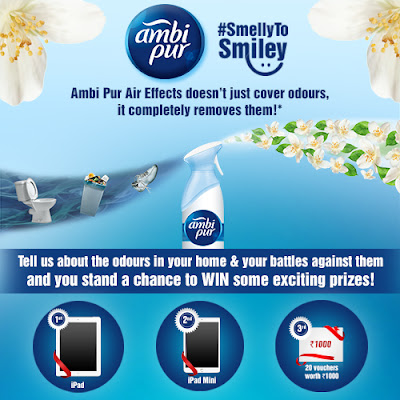 Like a child with a new toy, I followed the instructions and used AmbiPur Air effects on all the affected areas. There was still time for Mr. Hubby to return from office. I thought the smell would return by then and proceeded to the kitchen thinking I would use AmbiPur again before Mr. Hubby arrived. However, I got engrossed in my cooking and by the time the doorbell rang, I had completely forgotten about another dose of Ambi Pur.

As Mr. Hubby entered the house, he was pleasantly surprised, “Wow! The house smells lovely today! Have you tried some new incense sticks?” He asked.

“No No incense wouldn’t have lasted that long…it’s the new AmbiPur Air effects.” And I explained to him how Ambi Pur Air Effects doesn’t just cover odours, it completely removes them. We both enjoyed a lovely romantic dinner at home that day. The smells were nowhere to play the spoilsport, thanks to AmbiPur.

AmbiPur has become a permanent feature of our house now. As I gear up for another round of Mumbai monsoons, I know there’s no need to worry about the smells, for thanks to AmbiPur…I am all smiles!

I am blogging for #SmellyToSmiley activity atBlogAdda.com in association with Ambi Pur and BlogAdda
There are several ways of making your home odour free. Flowers, incense sticks etc. However, we all know all of these options just last for a short time until you and your guests can pick up that horrid scent again. Ambi Pur Air Effects versus Regular Aerosols does not just help by covering the odours it helps remove them completely!
Posted by Shaivi